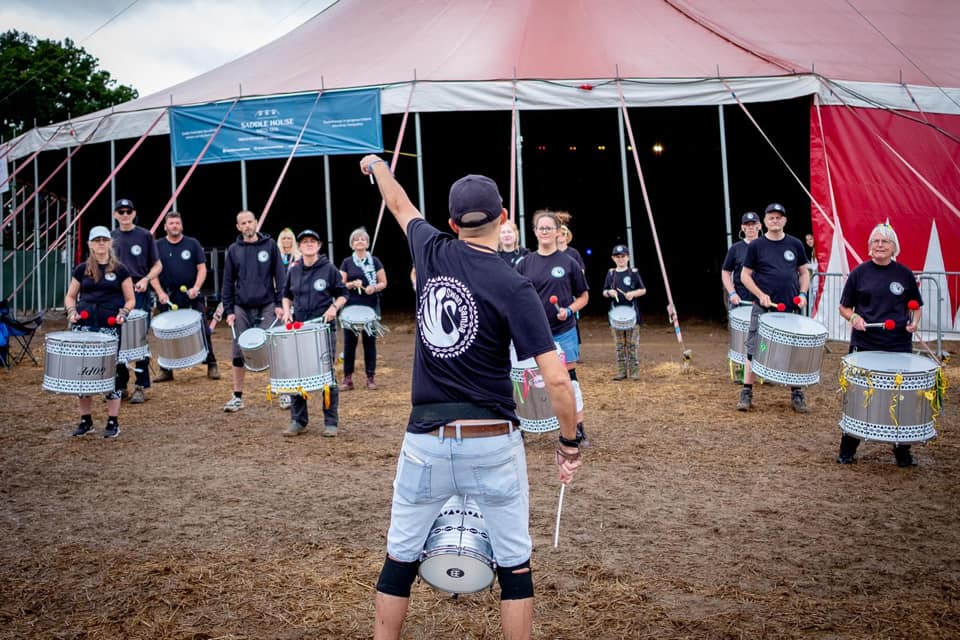 Lessons in Samba drumming for all abilities including the opportunity to perform at major festivals and carnivals in the Hampshire area as part of Swan Samba.

Samba is a Brazilian music genre that originated in Rio de Janeiro in the early 20th century.

Samba style is a mix of genres. Like reggae, it often has a slightly more laid back groove and has strong beats on 2 and 4 of each bar. That said, certain samba reggae bands are anything but slow.

Different Samba styles originate from specific areas of Brazil. Maracatu for instance comes from the cities of Recife and Olinda. Ijexa is associated with the north east of Brazil, but can trace its roots back to West African styles of drumming. Samba reggae has parts similar to Batucada and comes from Bahia, north-east Brazil.

The main drums used by the band include Surdo’s, large base drums that drive the main rhythm of the songs, Caixas which are a type of Snare Drums and Repiniques (or reps) which are tuned very high to produce a tone that cuts through the sound of the rest of the bateria and it is the lead instrument.

Home > All Classes
We use cookies on our website to give you the most relevant experience by remembering your preferences and repeat visits. By clicking “Accept All”, you consent to the use of ALL the cookies. However, you may visit "Cookie Settings" to provide a controlled consent.
Cookie SettingsAccept All
Manage consent